Sometime later this year, ethereum is set to make the biggest change in its near-decade history, an event that’s certain to ripple through the entire ecosystem of cryptocurrencies and digital assets. Think of it this way: the most important commercial highway in crypto is about to be completely repaved.

Ethereum is essentially computer software that uses so-called blockchain technology to provide a digital ledger for recording transactions. It’s become the most popular basis for a growing array of commercial crypto assets and applications, including lending products, non-fungible tokens (NFTs), as well as its native token, ether. 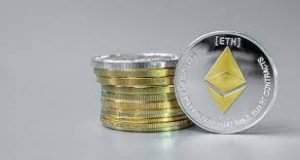 Ethereum isn’t owned by anyone but built and refined by a community of developers, and it runs on a network of data centres throughout the world. These data centres operate as “miners” on the network, ordering transactions that are posted to the digital ledger. In return, these miners get paid in ether. This system has been dubbed “proof of work”.

Developers who work on refining the ethereum software roll out periodic upgrades, but none has been as major as the one expected this year. Named “the Merge”, it will replace miners with so-called “stakers”. Miners order transactions by solving complex calculations using millions of powerful servers — a system that’s been criticised for its heavy use of electricity. Stakers, by contrast, will order transactions by putting up their own ether on a new system, which has been in testing since December 2020. People can already use their digital wallets to stake ether on this test system, called the Beacon Chain; after the Merge they will start to be selected at random to become what are known as validators, ordering transactions on the ethereum digital ledger into blocks and getting paid with new ether. This is called “proof of stake”.

Ethereum’s US$415.3-billion market capitalisation depends on the Merge going smoothly, but so do the thousands of businesses that operate on the blockchain, plus millions of users. Some $121.5-billion of capital is locked in ethereum’s decentralised finance (DeFi) apps, according to tracker DappRadar. Most NFTs — also with a total value in the billions — use ethereum.

“There’s never been, in the history of blockchain networks, a change on the scale of ethereum’s transition from proof of work to proof of stake,” says Chase Devens, an analyst at researcher Messari.

The Merge will be a nail-biter because a lot could go wrong. There could be software bugs or hacks, or miners could create an alternative ethereum network. During a 2020 network upgrade, a bug split Ethereum in two, wreaking havoc on its nascent DeFi ecosystem, the apps that let people trade, borrow and lend without intermediaries like banks.

Most centralised crypto exchanges are expected to pause ether withdrawals and deposits around the Merge as a precaution. DeFi apps may pause, too, if something goes wrong.

“With all technical upgrades of all these large chains, you need to use caution,” says Katie Talati, director of research at digital asset manager Arca. “At the end of the day, we are dealing with unknown technology.”

The miners are causing the most worries. Many may quit the network right before the Merge, figuring they can make more money by selling their gear than by waiting to get the last of the rewards. Too steep a drop in the network’s mining power, or the “hash rate”, could weaken ethereum’s security, spelling disaster for its token and the various apps using the network. Ethereum’s core developers have planned for that scenario. “If we see the hash rate dropping, we could pull the Merge forward,” says Tim Beiko, a computer scientist who coordinates ethereum developers. “All the software is built with an emergency option.”

Miners may also choose to fork ethereum, by taking the existing proof-of-work software and continuing to support it. That would create two different versions of ethereum that run in ­parallel: proof of work and proof of stake.

“We believe POW and POS will coexist for a period of time after the switch,” says Danni Zheng, vice president of BIT Mining, a mining provider that’s also expanding its staking services.

“A contentious fork, it’s likely it would hasten our departure from the ethereum ecosystem,” Shirley says. Dapper may consider moving CryptoKitties to its own blockchain, Flow, he says.

A fork, or at least a lot of public criticism, is exceedingly likely because many ethereum miners don’t seem to know the Merge is coming. Ethereum developers communicate about the Merge on Discord and Telegram, messaging apps that many miners don’t use, Beiko says. Mining pools, which provide most of the transaction-ordering on ethereum today, take a percentage of the miners’ earnings, and it’s in their interest not to notify their members of the Merge so that mining continues at least until the network upgrade, he says.

“I am more concerned about the people who don’t even know this is happening, and they buy this $3 000 miner, and three months later it stops working,” Beiko says. “It would be a bad idea to start mining today.”

And some miners just don’t believe the Merge is really coming, because it’s been delayed in the past. “There’s a lot of scepticism because ethereum has promised proof of stake for five years,” Beiko says. “It’s hard to convince people that this time it’s for real.”

Shutting ethereum’s old chain will send shockwaves through the crypto-mining industry. Scrambling to find other uses for their equipment, miners will migrate their machines to other, similar chains such as dogecoin, litecoin, and monero. The hash rate on those other chains will balloon by five to 10 times overnight, says Sam Doctor, chief strategy officer at Bitooda, a digital asset fintech company. Overall revenue for this type of mining could drop as much as 90%, pushing many miners out of business, he says.

US miners will pursue clients outside the crypto industry, in areas such as artificial intelligence and genome sequencing, Doctor says. “But none of them have customer-acquisition experience.”

Investors may benefit from the Merge. The number of new coins issued on ethereum as rewards for ordering transactions should decrease by 50-90%, as the proof-of-stake chain will offer lower rewards, Beiko says.

In the next two years, the amount of ether that’s used for staking will probably increase from 8% to 80%, according to staking ­services provider Staked. That will reduce the ether in circulation, potentially pushing up its value.

Stakers will be able to use the ether they receive as rewards for ordering transactions, but not the ether that they stake — at least not until another software upgrade, expected six months or so after the Merge. Stakers are more likely to hold their ether for the long term than miners, who often need to sell some to cover electricity costs, says Kyle Samani, co-founder of Multicoin Capital.

After the Merge, the energy consumption of ethereum’s network should drop more than 99%. To order transactions on the new proof-of-stake network, a validator can use a high-end laptop instead of a server farm. The entire proof-of-stake ethereum is expected to consume around 2.62MW — about as much as a small town. By contrast, current proof-of-work setup gobbles up the energy of a midsize country.

“Even my daughter has picked up the ‘NFTs are boiling the oceans’ hysteria,” says Ben Edgington, lead product owner at ­ConsenSys, which builds infrastructure for the ethereum blockchain. “I expect that freeing ourselves from the negatives of proof of work will definitely help make applications like DeFi and NFTs much more socially acceptable, leading to significantly accelerated adoption.”

Much will depend on whether the Merge goes smoothly, of course. “If we do our jobs well, nobody will notice the moment that ethereum moves from proof of work to proof of stake,” ­Edgington says.