Editors and the long struggle against media chains 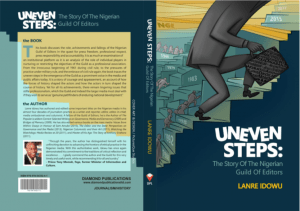 In Uneven Steps, Lanre Idowu brings the skills of a historian and a raconteur to offer two books in one. While the overt purpose is to recount the journey of the Nigerian Guild of Editors from inception to date, the author includes a significant aside on Nigerian Media Law being the media’s fight against the suffocating chains of repression and censorship. The double offer makes this book a significant and irresistible contribution to Nigerian media literature.

Uneven Steps adds to the growing literature in two areas: Nigerian media history generally and the making of media institutions. It is thus an invaluable inclusion in the bibliography for teaching and learning these subjects.

There is a sense of déjà vu reading this book in 2021 against the backdrop of a civilian government re-enacting the antics of the military as it seeks to subdue the media. Unfortunately for the Muhammadu Buhari Administration2, the media landscape has changed considerably and irreversibly. It flails as it fights the broadcast and the social media through the National Broadcasting Commission as well as diktats and underhand pressure on print publishers and editors.

The 194-page offering covers in depth the many battles of the Nigerian Guild of Editors and the Nigerian press in fighting efforts by the colonial, military, and even civilian administrations to corral it.

Uneven Steps covers the beginnings of the Nigerian Guild of Editors as a forum for title editors, the expansion of that remit to include persons in broadcasting, the long journey to a Cade of Conduct for Nigerian journalists and the battles with officialdom.

Foremost journalist and a one-time president of the Guild, Prince Tony Momoh offered a foreword. “With this authoritative work, Idowu has once again demonstrated his commitment to the traditions of critical reflection and excellence”. Editor of the Daily Times in its heydays and confrontation with the National Assembly of the Second Republic, Momoh emphasised the importance of the media using the 1999 constitution as the compass and roadmap for their role. “Section 22 of the Constitution asks the media to monitor governance on behalf of the people in whom sovereignty resides”.

The Guild of Editors is a key component of the organised media in Nigeria. It is one of a quartet. Others are the Nigeria Union of Journalists, the Newspaper Proprietors Association of Nigeria, and the Broadcasting Organisations of Nigeria. They form the Nigeria Press Organisation.
Uneven Steps recounts and reflects on the history and challenges of the NGE. The Guild tackled issues such as ownership of newspapers, professionalism, policy, and legal environment of practice. The NGE came into being in May 1961 after the NUJ in 1955. The Guild positioned as an elite club of professional news managers.

The 17 chapters of Uneven Steps cover the beginning of NGE, the press at independence, and its founding fathers. Then it reports on The Guild under Military Rule (1966-1979), in the Second Republic (1979-1983) and “The Guild and Military Repression (1993-1998)”. Others include “Who is an Editor?”, the Editor in the Digital Age and issues around funding and the future of the Guild.

Lanre Idowu does an excellent service of providing reference materials in Uneven Steps. There is a Table of Laws affecting media practice, and a Table of Cases, being six stand-out cases over the years.

I recommend Chapter Thirteen on “Who is an Editor” is critical reading. It addresses the contentious issues of definition and qualification for membership of the Guild. Equally interesting are Chapters Fourteen and Fifteen on “The Editor in the Digital Age” and “The Associate Membership Conundrum.” The three chapters enable the book to address contemporary issues and the future.

Uneven Steps is a valuable reference work and joins the literature on the history and development of the Nigerian Media and the sub-section on media institutions. Students of mass communication, journalism and professionals in the field should get and read a copy.

The Autobiography of Chief Lawson Omokhodion