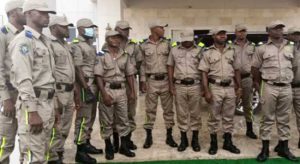 The South-east Security outfit codenamed ‘Ebubeagu,’ in collaboration with the police has arrested 38 suspected bandits in Ebonyi State and killed one of the gunmen. This was made known by the Commissioner for Internal Security, Border Peace and Conflict Resolutions, Mr. Stanley Okoro Emegha, in Abakaliki yesterday, saying that thirty-seven of the suspects were arrested in the Agubia axis of Ikwo Local Government Area of the state, while allegedly plotting to attack some security and other government facilities in the state.

According to him, the suspects were arrested during a joint operation coordinated by him and the Ikwo Local Government Council Chairman, Mr. Steve Orogwu and the Ikwo Divisional Police Officer, (DPO).

He added that the suspects were arrested following a tip-off that they were about to attack police stations in the area and set ablaze some of the Independent National Electoral Commission (INEC) offices and some Courts in the Local Government Area.

Emegha said that the suspects came into the state from different parts of South-east to carry out the operation while others also came from the different local government areas of Ebonyi State.

“We got information that there were people gathering to go and burn some Police stations, burn some INEC officers and court in the area and then the Ebubeagu quickly mobilised and swooped in on them”.

“It was discovered that they had a map and came from different places like Enugu, Imo and others from different local government areas of Ebonyi State. We asked questions, they said they have the authority of whoever they called their boss, I don’t know how to burn those places”.

“But unfortunately, luck ran out of them and they were all arrested and have been handed over to the police”.

The commissioner said the suspects have confessed to the crime. According to him, the suspects said they were working on the instruction of their “boss” who the security agencies are working hard to unravel.