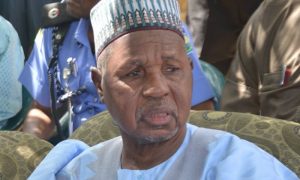 Governor Aminu Masari on Thursday disclosed that 10 local government areas in Katsina State were still being attacked by bandits despite efforts by security operatives to curb insecurity in the state.

The governor made the disclosure when the Chief of Army Staff, Lieutenant General Faruk Yahaya, paid him a courtesy call at the Government House in Katsina as part of his operational tour of military establishments in the state.

Masari, therefore, urged the Nigerian Army to put in more efforts in seeing to the end of banditry in the state. He told the Army boss that although security situation had begun to improve in the state, bandits still carried out attacks in the councils, giving him and others sleepless nights.

The governor said, “Ten out of 34 local governments in Katsina State are under severe bandits’ attacks daily. So, with that in mind, there is no way we can sleep. Our phones are permanently on to hear what is happening in the local governments. Before breakfast, I am briefed about what happened last night. So, General, we are not in a very comfortable situation, but we thank God.”

The Emir of Katsina, Dr. Abdulmumin Usman, urged the Nigerian Army to collaborate with the locals. The royal father said, “You cannot know the terrain more than the locals and the district heads. See what Governor Zulum did in Borno, employing 1,000 vigilantes to collaborate with security operatives. So, please work in tandem with others.”

The Emir recalled an incident where bandits cut the hands of some farmers in Funtua zone, declaring no nation could claim to be great when there is insecurity.