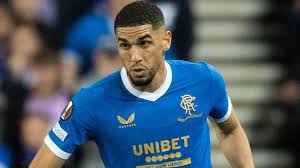 Defender Leon Balogun is set to open talks over a contract extension with Glasgow Rangers.

Balogun will be out of contract with the Gers May 31.

Steven Davis and Connor Goldson are other players who are also out of contract at Ibrox.

Rangers sporting director Ross Wilson revealed that the Nigerian’s future and that of Davis would be addressed first.

“The futures of Balogun and Davis are the club’s top priorities,” Wilson was quoted as saying to Daily Record.

The Nigeria international, who has been at Ibrox for two seasons, made 37 appearances, scoring twice for the Light Blues last season and was a key defensive figure.

Balogun, 33, has an option of a one-year extension at Ibrox.

The former Hanover, Werder Bremen, Fortuna Dusseldorf and Mainz defender is one of the 10 defenders listed for the forthcoming Super Eagles international friendlies against Mexico and Ecuador in the US.

The Eagles will battle with the El Tri at the AT & T Stadium in Dallas, Texas on (Saturday) May 28 before flying to New Jersey to confront Ecuador at the Red Bull Arena in Harrison on June 2 (next Thursday).