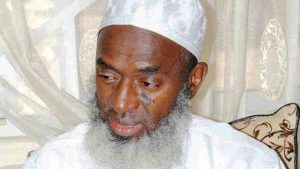 The Department of State Services (DSS), yesterday, confirmed that its operatives at the Kaduna office invited an Islamic cleric, Sheikh Ahmed Abubakar Gumi for questioning to aid an ongoing investigation. The Service, however, said the Islamic cleric was released after interacting with the operatives.

DSS spokesman, Peter Afunnaya, who confirmed the development in Abuja, said, “it’s not out of place for the Service to invite any person of interest.”

Afunnaya, however, did not give details of the investigation Gumi was invited to aid. But it is believed that his invitation was not unconnected with his recent open allegation that the Nigerian military collude with the bandits terrorising many parts of the country.

The Islamic cleric had while speaking during a programme on Arise TV last Wednesday, questioned the source of the weapons used by bandits, alleging that security agents were collaborating with them to kill and kidnap for ransom.

“These bandits are operating with a lot of people in the security system. This is business, otherwise, how can these big weapons they use cross the borders into the country if money is not exchanging hands,” the cleric had said.

In its response to Gumi’s allegation, the military, in a statement by the Director, Army Public Relations, Brig Gen. Onyema Nwachukwu, titled ‘Nigerian Army not Colluding with Bandits’, denied the allegation.

“It is essential to remind ourselves that this same military, being accused of connivance, are the ones who recently put their lives on the line to rescue abductees of the Government Secondary School, Birnin Yauri from kidnappers.

“While the Nigerian Army will not attempt to excuse the possibility of black sheep amongst its fold, it must be stated unambiguously that it will not condone any form of sabotage or aiding and assisting the enemy by any personnel,” he said.

Gumi’s spokesman, Malam Tukur Mamu, had in an interview with VOA Hausa, earlier yesterday, debunked the statement credited to the cleric, saying there was no where in the television interview Gumi categorically accused the entire military.

He, therefore, urged the military and the television station to apologise to Gumi and retract the statements made against him or else he would seek legal redress.

Meanwhile, the cleric yesterday clarified that he was not arrested by the DSS as reported in some sections of the media but was only invited to clarify his visits to armed bandits amid the security challenges bedeviling the country.

Speaking in Kaduna, Gumi said: “I was invited on my visits to the bandits and the mission of the visits. I was not arrested or detained. All they asked me was in respect of my visits and that is all.”

In separate interactions, the organisations commended the DSS for inviting the cleric for questioning, but expressed reservation, saying the invitation should not be a mere formality.

Afenifere leader, Chief Ayo Adebanjo, said it doesn’t matter whether Gumi’s invitation by the DSS was belated or not, stating that Nigerians have a government that does not take their security seriously.

“This step is a kind of double standard and my worry is only God can save Nigeria as it is now. If President Buhari could wave aside the demands of 17 Southern governors with such impunity, why should we then take DSS invitation to Gumi seriously? Let’s wait and see.”

Spokesman of UPU, Abel Oshevire, said Gumi’s invitation must not end at that: “We hope it wouldn’t just start and end there because we have been hearing a lot of loose talk from Gumi, which indicated that the man has a lot of information about the operations of the bandits,” he said.

Like Adebanjo, the UPU spokesman said the DSS should absolve itself of any double standard, saying if the quizzing of Gumi gives inkling on how to get at the bandits “our security agencies should act without hesitation because the same government drafted military to suppress IPOB in Southeast.”

To the spokesman of Middle Belt Forum, Dr. Isuwa Dogo, Gumi’s invitation by DSS does not worth commenting on. On his part, former Minister of Defence, Olu Agunloye, cautioned Nigerians against unnecessary excitement or hope over Gumi’s invitation.

“What would they be asking him (Gumi)? My personal feeling is that Gumi is only trying to cause distraction. There are more important issues to be addressed than focusing on his invitation, which I think the National Assembly and the Presidency are not looking at,” he said.