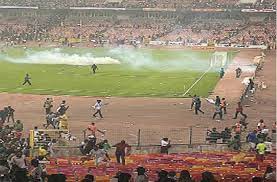 Irate fans invaded the main bowl of the Moshood Abiola Stadium destroying everything in sight immediately after Nigeria’s 1-1 draw against Ghana on Tuesday, which ended the Super Eagles dream of reaching a seventh World Cup appearance in Qatar in November.

Ghana qualified for the World Cup thanks to the away goal rule after the first leg at the Baba Yara Stadium in Kumasi ended goalless.

Eagles coach Austin Eguavoen made four changes to the team that earned a goalless draw at the Baba Yara Stadium in Kumasi Friday, with Ademola Lookman on for Moses Simon, while Dennis Simon replaced the injured Samuel Chukwueze, Frank Onyeka taking the place of Kelechi Iheanacho and Calvin Bassey made his full debut ahead of Zaidu Sanusi.