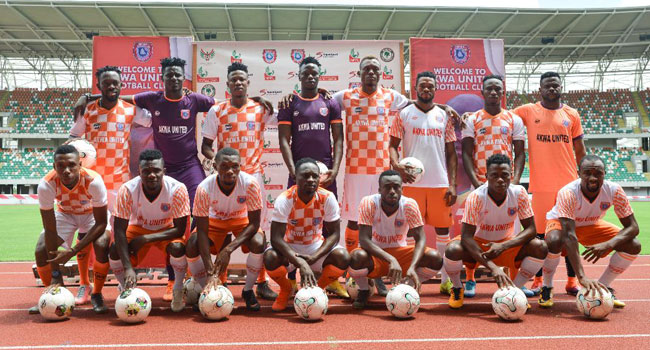 Midfielder Seth Mayi scored his first goal of the season to secure a 2-1 win forAkwa United.

Mayi who was voted the club’s best midfielder in the first stanza of the league confirmed his quality when he scored from close range in the 68th minute.

Charles Atshimene shot the hosts into an early lead in the 20th minute. Two minutes later, Atshimene gave a fine pass to MfonUdoh but his strike was stopped by goalkeeper Ariyo.

In the 34th minute, the productive Sadeeq Yusuf scored his 9th goal of the season to put the visitors into the contest.

In the second half, Coach Kennedy Boboye’s team mounted pressure on coach GbengaOgunbote’s team until Mayi scored the winner. Waheed Adebayo had a chance to score but his effort went wide. The defeat for Sunshine Stars took their winless run to 13 matches.

Coach GbengaOgunbote says careless defending cost his team victory. “We lost the match to a careless moment and we were unable to make up for it. That is the price for being careless.”

Up next for Akwa United is Dakkada FC while Sunshine Stars will host Jigawa Golden Stars in Akure.

In Enugu, Rangers International FC beat Enyimba 2-0 in a rescheduled match-day 19 fixture. Both goals were scored from the penalty spot. Christian Nnaji and Elijah Ani got the goals for the Flying Antelopes. The victory took Rangers to 5th on the log with 33 points while Enyimba dropped to 7th with 31 points.

Without Ahmed Musa, Kano Pillars almost secured away victory over Warri Wolves in Ozoro. Malam Ali’s goal in the 58th minute was looking good for SaiMasuGida until the 86th minute when the home team scored from the spot through Mark Daniel.

In Lafia, Nasarawa United beat this season’s surprise package, Kwara United 2-1 to record their first win in the second stanza of the league. Goals from Anas Yusuf and Silas Nwankwo did the job for coachBalaNikyu’s team. WasiuAlalade’s goal in the 90th minute was mere consolation for the Harmony Boys who are now third on the log.

Katsina United recorded the biggest win of match-day 20 with a 5-1 spanking of Wikki Tourists at the MuhammedDikko Stadium in Katsina. Joseph Atule got the goal-scoring party started in the 16th minute while Rasheed Ahmed registered a brace. Samuel Nnoshiri and Samuel Kalu also scored to give the Changi Boys an important victory.

FC IfeanyiUbah was walked over by MFM FC after the Nnewi-based team failed to show up in Enugu for the encounter.

On Saturday, Jigawa Golden Stars kicked off the second stanza of the league with a 2-1 win over Lobi Stars.