Experts caution that the Nigerian economy may be heading to recession, but Mrs Kemi Adeosun, Minister of Finance is optimistic that the recent measures taken by the present administration would reflate the economy, reports Dike Onwuamaeze 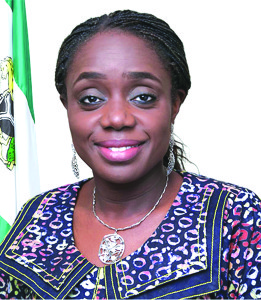 The Nigerian economy is going downhill. Productivity, as measured by the Gross Domestic Product (GDP), recorded negative growth in the first quarter of 2016. It grew by -0.36 percent (year-on-year) in real terms. Only agriculture and trade grew by 0.68 per cent and 0.40 per cent respectively, while industry, construction and services recorded negative growth of -0.93, -0.26 and -0.08 percentage points respectively.

Except for the third quarter of 2015, the country’s GDP has declined progressively since the fourth quarter of 2014. Inflation galloped from 9.6 percent in January to 15.6 percent in May 2016. Currently, there is mass retrenchment of workers while the unemployment rate is also escalating. Factories are closing while the country scored a negative trade balance of –N184.1 billion in the first quarter of the year. All these are tell-tale sign of an economy heading to recession.

The National Bureau of Statistics (NBS) in its foreign trade report for the first quarter of 2016, stated that the total value of Nigeria’s merchandise trade at the end of Q1, 2016 stood at N2,723.9 billion against the preceding quarter value of N3,517.4 billion as at December 2015. This was N793.5billion or 22.6 percent less. This development came due to a sharp decline in both imports and exports. Exports saw a decline of N671.1 billion or 34.6 percent, while imports declined by N122.4 billion or 7.8 percent. The steep fall in exports brought the country’s trade balance down to – N184.1 billion, or N548.7bilIion less than in the preceding quarter. The crude oil component of total trade decreased by N716.7 billion or 46.6 percent against the level recorded in Q4, 2015.

The parlous state of the Nigerian economy was aptly captured by the Central Bank of Nigeria’s monetary policy committee meeting in May 2016. The committee said the economy suffered from severe shocks due to energy shortages and price hikes, scarcity of foreign exchange and depressed consumer demand, among others, in the first quarter of 2016. “Consequently, economic agents could not undertake new investments or procure needed raw materials. Shortage of foreign exchange arising from low crude oil prices manifested in low replacement levels for raw materials, other inputs as well as new investments. In addition, the energy crisis experienced in the first five months of the year, resulted in increased power outage and higher electricity tariffs, as well as fuel shortage; which led to factory closures in some cases.”

The situation was not helped by the prolonged budget impasse that denied the economy the timely intervention of complementary fiscal policy to stimulate economic activities in the face of dwindling foreign capital inflows. Even the capital budget that was meant to stimulate the economy is yet to be released. Udoma Udo Udoma, Minister of Budget and National Planning, claimed that the government’s adherence to due process delayed the release of N350 billion planned to reflate the economy.

Experts cautioned that time is running out on the economy.  To them, government should facilitate the implementation of measures that would reflate the economy. Prof. Mike Obadan, former director-general of Nigeria Center for Economic Management and Administration, Ibadan, pointed out that what the country is witnessing is a situation of stagflation – a high level of unemployment co-existing with high inflation. “An economy in recession implies that the level of economic activities, output, investment and consumption have declined compared to their previous levels. It implies high levels of unemployment of human and physical resources, low levels of consumer income and reduced purchasing power, high levels of poverty,” Obadan said.

According to him, the economy needs to be stimulated out of recession. This, he said, would require effective implementation of the 2016 budget, increased productive public spending at all levels to put money in the hands of the citizens to spend on goods and services so as to encourage production and employment.

In addition, payment of salary arrears and regular payment of salaries will help. This necessitates that the Federal Government should further mobilise resources to bail out the lower tiers of government.  It would also be most desirable if the allowances to be paid to the poor people could be increased to N10, 000 to be meaningful.  Government should also resolve the issue of renewed militancy in the Niger Delta.

Experts also canvassed for easy monetary policy aimed at boosting production by making funds available to productive enterprises at affordable interest rates. This could happen if the CBN stop underpricing its assets and securities to subsidise banks.

Despite the pessimism in some quarters that the economy is heading to recession, Mrs Kemi Adeosun, Minister of Finance insists that government is taking measures to address the country’s economic challenges.

She said that government’s strategy “is to provide a Keynesian stimulus to reflate the economy. The 2016 focus is underpinned by a desire to radically reposition Nigeria’s economy. This administration believes very strongly that the previous direction was far from optimal. We are pursuing a fresh direction consistent with our belief in building a resilient economy,” she explained. The strategy, she noted, is worth reiterating, adding that the 2016 budget is being debt funded and the borrowings are targeted at the financing of capital projects to address the infrastructure deficit, create jobs and build the platform for optimisation of the non-oil economy that will see Nigeria prosper. To this end, “we have commenced an aggressive programme of fiscal housekeeping: increasing revenues and reducing recurrent expenses. This will ensure that we move towards our objective of financing recurrent expenditure from revenue, rather than borrowing as obtained before now. In addition, we have signaled through our financial decisions that we are moving away from oil,” she said.

Adeosun noted that the idea that Nigeria can succeed this time is, for some, unthinkable. “But for those of us privileged to be part of this determinedly patriotic team led by President Muhammadu Buhari, it is and will be possible,” she assured.

0 0 0 0 0
Previous : Implications of non-payment of workers’ salaries
Next : New wave of job losses in the banking sector