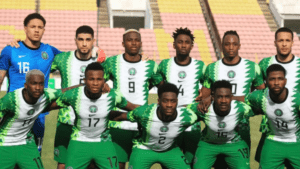 The second international friendly match between Nigeria and Cameroon in Vienna has ended in a goalless draw.

Last week Friday, at the same venue, the Indomitable Lions won the first game by a lone goal and the Super Eagles were hoping to put up a better performance to avenge that defeat but the plan failed to manifest for Gernot Rohr’s team.

Super Eagles captain, Ahmed Musa who is back in the Nigeria Professional Football League with Kano Pillars made the starting line-up and produced some trademark runs but the Cameroonians did some good defending particularly in locking up Paul Onuachu and ensuring he caused minimal problems in attack.

The Indomitable Lions had their moments. As early at the 5th minute, Tolo Nouhu tested goalkeeper Okoye through a fine attack they initiated from the flanks. Moments later, Onuachu’s shot from a delightful Musa pass was diverted for a corner kick.

In the 11th minute, Alex Iwobi made a goal-line clearance. Okoye was already beaten. Brice Moumi Ngamaleu had a clear chance to put the Cameroonians ahead but failed to score. Ignatius Ganago’s effort was only good for the side-net while Awaziem had to clear his lines when Arnaud Djoum and Jean Charles Castelletto threatened in the 23rd minute.

Nigeria had another opportunity to finish a counter-attacking move but couldn’t finish it.

Coach Rohr is impressed that his team didn’t concede a goal despite the number of players that were missing. “I’m very happy for Valentine, a lot of people did not understand why he was with us but today he showed reasons why he can play with the team. He did so well in central defence,” he said.

“In these friendlies, the result is not the most important. What is important is to test new players and we did just that. We wanted to score but we couldn’t because we were missing players like Osimhen, Chukueze, Kalu, Aribo Onyekuru but the players available did a good job,” Rohr concluded.