2023: Wike To Speak On State Of PDP Tomorrow 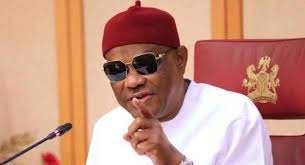 Governor of Rivers State, South-South Nigeria, Nyesom Wike has announced a plan to speak on the crisis rocking the Peoples Democratic Party (PDP) on Friday.

Governor Wike will be speaking on the state of the party ahead of the start of campaigns next week.

Governor Wike said he will also shed more light on the reason his camp pulled out of the presidential Campaign Council of the party for the 2023 general elections.

The Wike’s camp made the decisions at a strategic meeting held in Port Harcourt in the early hours of Wednesday.

The Camp decided to hold the meeting following the vote of confidence passed on Ayu as the party’s national chairman by the National Executive Committee (NEC) despite their demand for his resignation.

In a resolution read by a former PDP Deputy National Chairman, Bode George, the Wike camp insisted that its members will not work with Atiku until Ayu resigns and allow an acting Chairman from the South to lead the party.

George stated that the Wike camp stated that their position was not negotiable as the continued stay of Ayu as the part chairman undermines the unity and constitution of the party.

“Consequently, we resolve not to participate in the campaign council in whatever capacity until the resignation of Dr. Iyorchia Ayu”

Also, The presidential candidate of the Party, Atiku Abubakar has declared that the PDP National Chairman, Dr. Iyorchia Ayu won’t resign as being demanded by Wike and other PDP Governors in his camp.

He urged the aggrieved party chieftains to have a rethink and retrace their steps.

Atiku said: “On the calls for the resignation or removal from office of our national chairman, however, I must reiterate what I have said severally in public and in private; the decision for Dr. Iyorchia Ayu to resign from office is personal to Dr. Ayu and, neither I nor anyone else can make that decision for him.

“As to the calls for the removal of Dr. Ayu from office, however, I will state that, as a committed democrat and firm believer in the rule of law and democratic tenets, and our party being one set up, organised and regulated by law and our constitution, it is my absolute belief that everything that we do in our party must be done in accordance with, and conformity to, the law and our constitution.

“If Dr. Ayu is to be removed from office; it must be done in accordance with the laws that set out the basis for such removal. In any event, you will all recall that the very body that is empowered by law to initiate this removal from office, has already passed a vote of confidence in him”.