The draw for the 2023 Africa Cup of Nations qualifying groups were made in Johannesburg on Tuesday and put Nigeria in the same group with Sierra Leone, Guinea-Bissau, Sao Tome.

The matches are expected to begin in May. 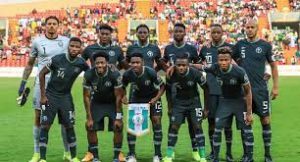 Winners and runners-up in each group except H qualify for the 24-team finals in the Ivory Coast during June and July 2023.

Ivory Coast automatically qualify from Group Has tournament hosts, along with the highest placed of the other three teams

Meanwhile, Mauritius have protested a 4-3 aggregate loss to Sao Tome e Principe in the preliminary round and the outcome of a disciplinary hearing will decide which nation competes in Group A.

See full outcome of the draw below