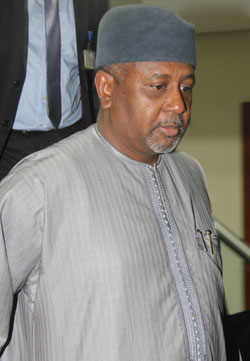 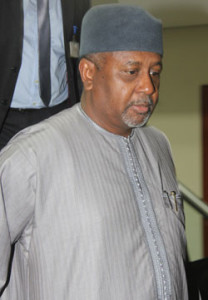 Embattled former National Security Adviser, Colonel Sambo Dasuki (retd.), has filed a fresh application to stop his trial for charges of alleged diversion of about $2.1bn arms procurement funds for PDP political campaign and personal use.

Dasuki filed the suite through his lawyers on Thursday before Justice Baba Yusuf of a Federal Capital Territory High Court in Maitama, Abuja, while the judge, fixed Friday (today) for the commencement of his trial alongside other co-accused.

Others who were on December 14, 2015 arraigned along with Dasuki on the same set of 19 counts are a former Director of Finance and Administration in the Office of the NSA, Shuaibu Salisu, and a former Director of the Nigerian National Petroleum Corporation, Aminu Baba-Kusa. Aminu-Kausa’s two firms – Acacia Holdings Limited and Reliance Referral Hospital Limited – are also part of the accused.

Whether the judge would be willing to take the fresh application filed by Dasuki on Friday (today) is yet unknown as the law guiding criminal proceedings prohibits the hearing of any interlocutory application aimed at halting a criminal trial.

The provisions of the Administration of Criminal Justice Act 2015 in its sections 306 and 396 stipulate that such interlocutory applications having to do with the merit of the charges filed should only be considered at the stage when the substantive issue in the case is being addressed.

Section 306 of the ACJ Act reads, “An application for stay of proceedings in respect of a criminal matter before the court shall not be entertained.”

Section 396 (1) and (2) of the law also reads: “The defendant to be tried on an information or charge shall be arraigned in accordance with the provisions of this Act relating to the taking of pleas and the procedure on it.

“After the plea has been taken the defendant may raise any objection to the validity of the charge or the information at any time before judgment provided that such objection shall only be considered along with the substantive issues and a ruling thereon made at the time of delivery of judgment.”

Justice Yusuf had on December 18 granted bail to Dasuki and the rest of his co-accused in the sum of N250m with one surety each.

On December 21, Justice Peter Affen of the same FCT High Court in Maitama, Abuja also granted bail to Dasuki and his co-defendants with respect to another set of 22 counts of misappropriation of about N13bn, which was part of the arms fund, in the sum of N250m with two sureties in like sum.

But upon being released from prison after meeting the bail conditions, Dasuki was reportedly re-arrested by the operatives of the Department of State Services, in whose custody he has since remained.

The defence lawyers are of the view that their client’s re-arrest constituted an act of contempt and that his trial should be stopped on that basis.

The prosecution was scheduled to open its trial by calling its first witness on Thursday but was stalled due to the absence of Dasuki’s lawyers, Mr. Joseph Daudu (SAN) and Mr. Ahmed Raji (SAN), who had written to the court that they would be in Kogi State for an election petition case on Thursday.

Prosecuting counsel for EFCC, Mr. Rotimi Jacobs (SAN), and other defence counsel in the case did not oppose the request by Dasuki’s lawyers.

The judge then fixed the trial for 10am on Friday (today).

Earlier on Thursday, the judge had to stand down the matter for about one hour, to await the arrival of Dasuki, who was being conveyed to the court by the operatives of the DSS.

Justice Yusuf stood the case down till 11am after an assurance by Jacobs that the DSS operatives conveying the ex-NSA to court were already on their way.

The court reconstituted at about 11am and the letter by Dasuki’s lawyers was considered.

Though Jacobs raised concerns about the delay which the request by the defence lawyers would cause, he conceded to the request as did the other defence lawyers, comprising Messrs Wale Akoni (SAN), Solomon Umoh (SAN) and A.U Mustapha.