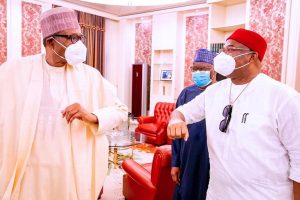 President Muhammadu Buhari is scheduled to pay a working visit to Imo State on September 9, 2021. Governor Hope Uzodimma of Imo State disclosed this to newsmen through his Chief Press Secretary and media adviser, Oguwuike Nwachukwu at the Sam Mbakwe International Cargo Airport Owerri on his return from an official trip to Abuja on Saturday.

Uzodimma said that he had used his visit to Abuja to secure approval for President Buhari to visit Imo State to commission some significant projects put together by his administration.

The Governor pointed out that the South -East had suffered a great deal of marginalisation and as a result, had been excluded in many things because of the obvious reason being that Nigeria is practising partisan democracy.

He said: “Once one is with the ruling party, there are some advantages one gets outside those who are not in that party. This is no longer a secret”.

Uzodimma said that Imo would reap bountifully from World Bank programmes on rural roads, NEWMAP projects, ecological programmes, among others that dominated his discussion and activities while in Abuja.

According to him, President Buhari did not only buy into his position on the above mentioned World Bank, NEWMAP, ecological programmes, but had confirmed his intention to come to Imo State on September 9 on official duty.

Governor Uzodimma informed that he had embarked on the working visit to Abuja to “resolve some critical issues that were supposed to be handled in Abuja which include but not limited to the World Bank programmes on rural roads, the NEWMAP projects and other erosion control issues. I used the opportunity to address some political matters.

“Imo has been able to attract additional support from Mr President on management of some ecological problems in the State,” he added.

Speaking on his assignment as the chairman, APC Campaign Council for the Anambra State governorship election, Governor Uzodimma acknowledged the importance of the responsibility thrust on him by his party and assured that he was doing his best to take the message of what the people stand to gain should they vote APC win the election scheduled for November 6, 2021.

“The South-East desire is to join the national politics and those of us in the committee are doing our best to convince our people in Anambra State that we will be better for it if they are in APC”, he said

According to him joining the party at the centre would enable the South-East leaders to manage the welfare and trust of their people better.

He said: “As a result, the Southeast wants to be part of the party at the centre so that we can get both our rights and privileges.”

At the APC Local Government Council Congress in the State, the governor commended the transparent, free and fair congress, noting that reports available indicated that the exercise went well across the 27 local government areas of Imo State.