I Won’t Submit Myself To Zoning In APC ― Yahaya Bello

Kogi State governor and aspirant for the presidential ticket of the All Progressives Congress (APC), Yahaya Bello, has said zoning would not be an issue in who picks the ticket of the ruling party for the next general elections. 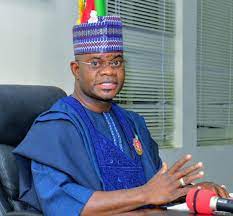 Governor Bello spoke through his Information Commissioner, Kingsley Fanwo, on Tuesday, at an interactive session with newsmen in Abuja.

Tribune Online investigation revealed that there is an understanding among the stakeholders in the ruling party that the southern part of the country would produce the successor to incumbent President Muhammadu Buhari since the new National Chairman; Senator Abdullahi Adamu is from the North.

But Governor Bello who incidentally is from the same North Central geo-political zone as Senator Adamu said competence, rather than zoning, should determine who picks the APC presidential ticket after Muhammadu Buhari from the North-West geopolitical zone.

He claimed that power rotation has never been a blessing to the country.

He said: “Until we challenge the status quo, that idiosyncratic page must be broken before you can be talking of progressing as a nation and as a people. So it’s no more about rotation. The governor said; I’m going to quote him now.” I was born in North Central. I was born an Egbira man. I did not choose to be an Egbira, I did not choose to be a Northerner. That should not determine criteria for hiring leaders.